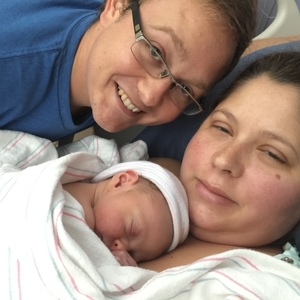 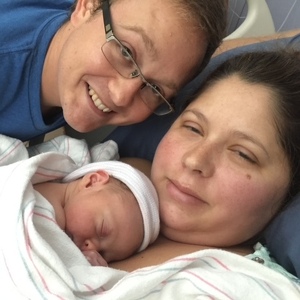 Thank you for visiting my 2022 Promise Walk for Preeclampsia fundraising page. My goal is to help our community raise funds and awareness and save the lives of moms and babies! If you can, please make a donation to support our efforts to fund education and research into this life-threatening disorder of pregnancy and please take the time to read how Severe Preeclampsia and HELLP Syndrome effected my own pregnancy journey.

﻿In 2014 when I found out I was pregnant, we were excited, nervous and full of wonder. What would pregnancy be like? Would we have a boy or a girl? Would we be good parents and set good examples for our child? How would our families feel? Our lives would forever be changed and we were happy about that.

The beginning of my pregnancy went pretty well. I had normal pregnancy symptoms like nausea and just being tired. It wasn't until the end of month 5 that I really started to feel like things were changing from a normal pregnancy. My blood pressure was fluctuating, but the midwife would take it over and over again at the same appointment until she was satisfied. I also gained 9lbs in one week but even though I let her know my diet was healthy, she insisted that I could do better. The exhaustion and swelling started increasing too. I kept being told it was what every pregnant woman felt like. That was wrong. So wrong. I was unheard. I was uneducated and I didn’t know how to fight for my own health. For awhile, my pregnancy stayed like that. Halfway through the 7th month, things started changing again. I was getting pain in my ribs and it was getting hard to breathe. Again, when I spoke to my doctor's office, I was told my symptoms were normal, even when I insited that something wasn't right and I didn't know how much longer I could go on that way.

My orginial due date was July 9th, but because of what I was going through, I had him on June 23rd.The night before I had my son, I went to the E.R. Instead of running blood tests to check my platelets, they gave me pain meds and sent me home. I ended up having Severe Preeclampsia and HELLP Syndrome. BUT...I was lucky. The next morning at 5am, my water broke due to the amount of stress my body was under. I had Gabriel at 8:12pm and with the exception of mild jaundice, he was healthy. I on the other hand, was on a magnesium drip for 2 days and had multiple blood transfusions. The doctor didn't want my husband to communicate with our families until we knew what direction I was going to go in. It took almost a full week, but i was able to go home on the afternoon of the fifth day. I am okay now, but still suffer from PTSD and anxiety.

Delivery is commonly represented as a cure for Preeclampsia and HELLP Syndrome, but it can actually occur up to 6 weeks after birth. They diagnosed me when I was in labor, but had my midwife and doctor’s office listened to my concerns and taken my swelling, weight gain and fluctuating blood pressure more seriously, I fully believe I would have been diagnosed much earlier. My goal is to help raise awareness for Preeclampsia, HELLP Syndrome and other pregnancy-related conditions that result in high blood pressure and hypertension.