Anthony is On the Move for Nevus Outreach!

There are no sponsors for this event.

Join us for a Certified 5K and 1 Mile Fun run to raise money for Congenital Melanocytic Nevus research. 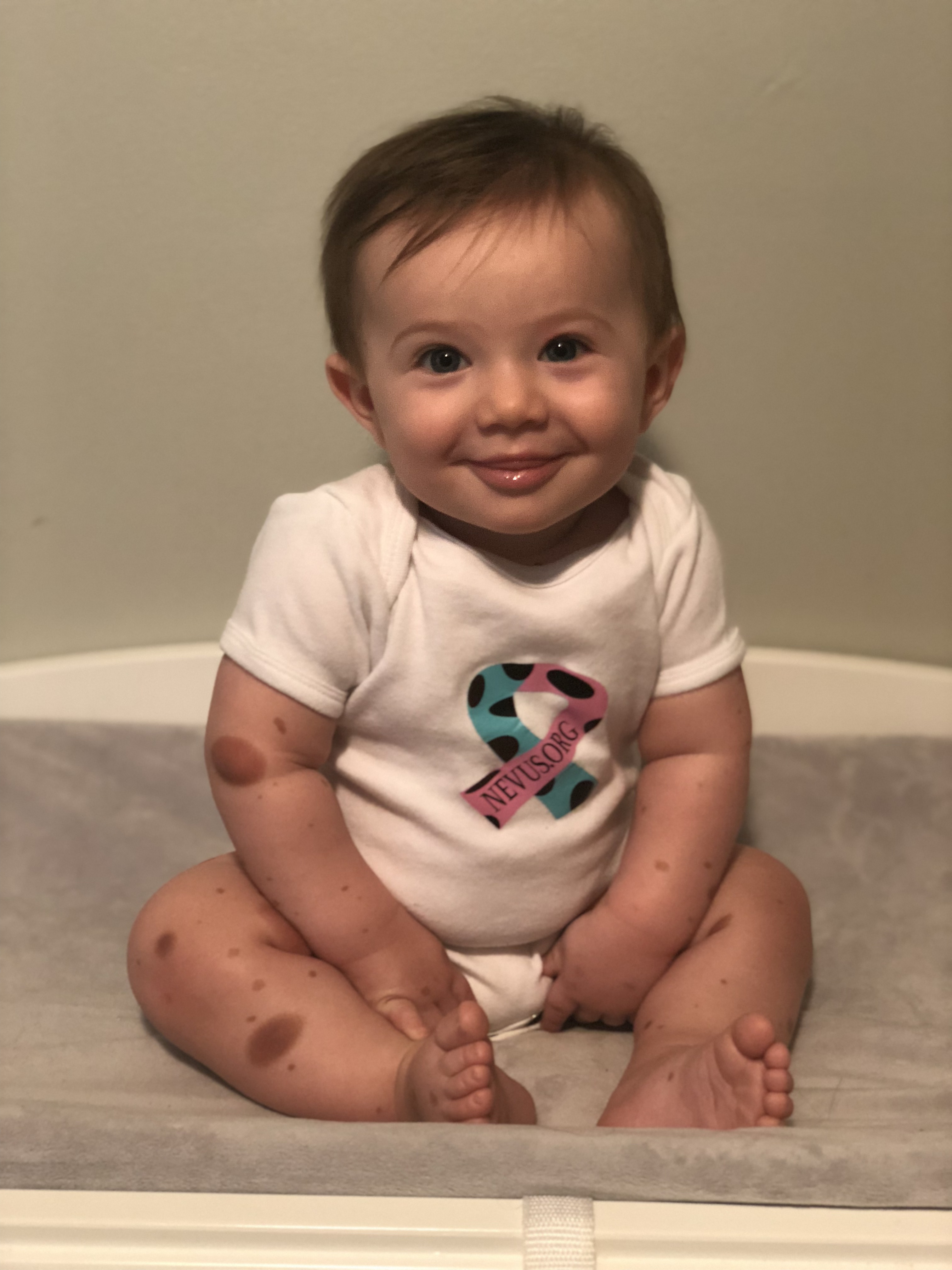 That statement could not be any truer for our greatest blessing, Anthony Frank VanDerzee Jr.

My name is Jenna VanDerzee and my husband is Anthony. We were married in August of 2014 and found out in January of 2017 our dream to become parents was finally coming true.

The time leading up to becoming parents was so exciting and a little nerve wracking. Anthony and I were beyond thrilled when we found out I was pregnant. We had every test done and every doctor’s appointment we left with positivity, as my pregnancy was easy with zero complications.  On September 4, 2017 my water broke around 11 o’clock in the morning. Shortly after, the two first time parents packed the car with all the bags and pillows eager to meet our little one and find out if Baby V was a boy or a girl. Baby V did not come as soon as we expected. 15 hours later after an emergency C section on September 5, we met our greatest blessing, Anthony Frank Vanderzee Jr. Anthony was the first to tell me that it was a boy, but amongst his excitement to announce, it was a boy, came some silence. They briefly showed me my son only for a nurse to come over and tell me that he had to go to the NICU due to “spots” all over his skin. No one in the delivery room was sure as to what our son had, therefore no one could give us any answers as to what was going on.

We thought we were prepared for everything, but we were not prepared for this. As our son was taken to the NICU, I had to wait in recovery for what felt like a month. My husband Anthony went with him hoping for answers. The NICU nurses had called the neonatal Dr. in from CHOP to inform my husband as to what was happening. All the while some very scary possibilities of what the future held were also thrown our way. There were a lot of “what ifs” and that new parenthood joy turned quickly to fear and anxiety for the future. We looked at our sweet boy and couldn’t help but wonder Why us? Why him? The doctor told us what Little Anthony’s skin condition was called and wrote it down on a post it, as I read the words Congenital Melanocytic Nevus I cried and cried.  We didn’t enjoy those new parent moments, we spent so much time googling and researching, and panicking and going to doctors. We had so many questions and had so much to educate ourselves on. All things aside, we had a beautiful baby boy who we would do absolutely anything for.

Little Anthony has a very large Nevus “birthmark” on his back, and is covered from head to toe in smaller “birthmarks" called satellites. Due to these birth marks he has a higher risk of melanoma and he will have to be extra carefully watched in the sun. He has no sweat glands where his nevus is so he becomes hot faster than most of us. As I mentioned this skin condition is rare, but having a giant Congenital Melanocytic Nevus is so rare it occurs in 1 in 500,000 babies. Due to the fact that it is so rare it was very difficult for us as it has been challenging to find people to talk to about it, and most doctors we’ve encountered have never seen it.

Congenital Melanocytic Nevus(CMN) is not genetic. There is no way it can be detected, and there is nothing you can do to prevent it. Aside from CMN There are many other complications that can come with it such as Neurocutaneous Melanosis (NCM), seizures, and hydrocephalus. Fortunately,  Anthony Jr had two MRIs to test for NCM and it was ruled out. Not all children are as lucky and their families are facing challenges far more difficult than us.

Our son is that ONE in 500,000 who has Giant Congenital Melanocytic Nevus. We will spend our lives not only being his advocates, his voice, his protectors and his support system, but we also vow to spread awareness. Our hope is it will prevent a needless stare or a rude comment. With this, we then have accomplished our goal. We want to make you aware of our special boy and the other children/adults in the world with Congenital Melanocytic Nevus. Aside from the diagnosis of CMN, Anthony Jr. is a happy, healthy, smart, and handsome boy.  We are beyond blessed to be his parents. Because of him we have become more appreciative of the life we have been given and learned not to take anything for granted.

100% of the money from this race and donations will go entirely to the Nevus Outreach Foundation,  which will go towards research and finding a cure for Congenital Melanocytic Nevus.

We thank you for taking the time to read our story and hope you can join us on September 16!

On Sunday, September 16, 2018 the 1st annual "Anthony is On the Move for Nevus Outreach Certified 5K and 1 Mile Fun Run.