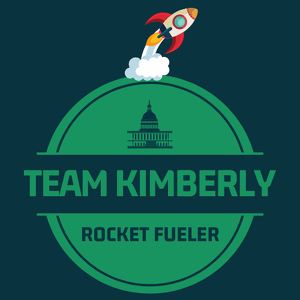 Until we fundamentally change the way elections work in this country - we have to be unrelenting in our support for candidates who refuse to take special corporate interest money. Please, please donate what you are able!

Why I Support Kimberly Graham for US Senate

I first learned of Kimberly Graham this summer on Twitter, unsurprisingly. Overall, I thought she was pretty cool & really appreciated the transparency in her policy stances & plans. But I, like probably many of you, had made the initial decision to stay out of the senate primary because I wanted to preserve my energy until after the primaries and focus on getting Ernst out by backing whomever the nominee ended up being.

Then a couple months ago, I learned that another candidate in the race not only hadn't released any policy positions, but had accepted tens of thousands of dollars from corporate lobbyists for big pharma, big tobacco, and the health insurance industry. Right then I realized that staying out of this primary is not an option for me.

Pledging to not accept money from corporate PACs is one thing, but it means absolutely nothing if you accept money from their lobbyists. It also means you will always be beholden to those corporate interests, no matter how long you've lived in Iowa or how nice you are in person.

What sealed the deal for me was watching Samantha Boucher get hired as her campaign manager. As a non-binary trans person in politics, watching this glass ceiling being broken made me understand that Kimberly Graham would not only lift up the voices of the marginalized, but actively trust them.

I joined this team because I want a senator who truly represents the people of Iowa - not the corporations that rent space here.

This user hasn't earned any badges yet.