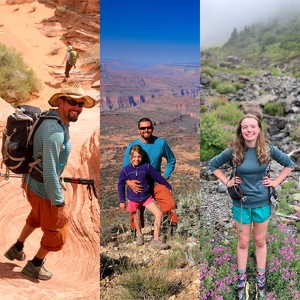 Thru-Hiking The PCT to Cure CJD

Hello, my name is Hilary, and I am thru-hiking the Pacific Crest Trail (PCT) this year (2022) in memory of my father, Jon. My father was an avid adventurer and outdoorsman who had an unparalleled zest for life.

Thru-hiking the PCT was our dream, my father and mine. When I was eight years old, I came to my dad with a magazine clipping that told of a teenage girl's journey on the PCT with her own father and I thought “this could be us!” My father and I got to work, buying maps and guidebooks on the trail, dreaming of the day we would finally embark on the trail as a father-daughter team and have the adventure of a lifetime together. I told anyone that would listen that when I was sixteen my dad and I were going to hike the length of California, Oregon, and Washington together on a trail called the PCT that was over 2,000 miles long.

All throughout my childhood my father served as my adventure partner. We went hiking and backpacking together. We went on road trips and explored the natural wonders of the world off the beaten path. My father taught me how to walk fast and the importance of slowing down to take pictures. He bred a curiosity in me to always want to see what was around the next corner, an adventurous spirit that made me game for any challenge and instilled in me a sense of great resilience which ultimately helped me through his death.

My plan stayed in place for the next five years as my father and I hiked and backpacked through slot canyons and over desert mesas, trekked up to fire lookouts and swam in glacial lakes, enjoying our time together out in nature and looking forward to our grand adventure ahead. When I was twelve, however, my father fell ill. His eyesight went first and then his stability, followed by his speech and memory. My father, a man with a zest for life and an adventurous spirit went from being full of life to fatally ill in a matter of months. When my father eventually received a diagnosis two months after the initial onset of his symptoms, he was given between two to six months to live. My father died less than a month later on the day following my thirteenth birthday from familial Creutzfeldt-Jakob Disease (CJD).

From my dad and through his death I have learned that I should live my life to the fullest so that when I die, I am not filled with regret, something my father accomplished in his life through his embodiment of the “work hard, play hard” mantra. My father may have died young, he may have been taken long before his time, but he lived his life like he knew that his days were numbered, like he knew that nothing was guaranteed, and that nothing should be taken for granted. He is not here to thru-hike the PCT with me this year but that is not to say that his spirit won't be there with me every step of the way. Through my thru-hike I not only aim to hike in my father's memory but to help raise awareness about CJD and help other families like my own by raising money for the Creutzfeldt-Jakob Foundation.

During the spring and summer of 2022, I plan to thru-hike the Pacific Crest Trail. My plan is to start at the Mexican/California border near Campo at the end of March and hike over 2,000 miles through California, Oregon, and Washington to the Canada/United States border near Manning Park where I will end in late-August. In total my hike should take about 5 months and I plan to hike an average of 20 miles a day.

Thank you for supporting my hike and please consider making a donation to the CJD Foundation.