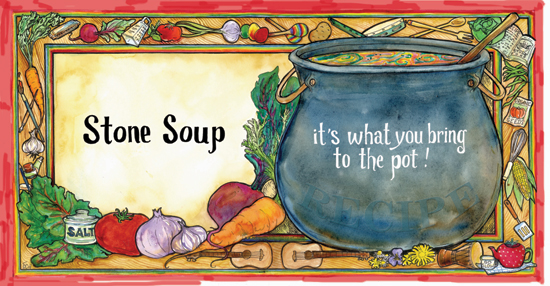 There is a fable about a hungry traveler who arrived in a village where the residents were also hungry. Each thought that they had nothing to spare. From door to door the traveler begged, but no one could spare a meal. Turned away at the last house, the traveler announced that he would have to make stone soup. He pulled out a stone and a pot, and lit a fire.

“Can I bother you for some broth?” he asked a villager. She said that yes, in fact, she did have broth to spare. “This would be better with a carrot,” he mused.  A second villager did, in fact, have a carrot to spare. “An onion would add flavor,” he said aloud. Another villager had an onion.

It went on like this, each villager contributing one ingredient, until a huge pot of soup was created. With each villager giving what they had, there was enough for all.

Giving what we can…and being able to ask for help when we need it…is what living in community is all about. This spirit of the “Stone Soup” underlies all we do at Second Harvest. We are stronger together.

In honor of the 20th Anniversary of this beloved community event and to help keep our sense of connection ad community strong through this year’s event,  we invite you to share a favorite soup recipe and the story around it for this Stone Soup Community Recipe Share. Send your recipe + story to Jenny Moore at jmoore3@secondaharvest.org and we’ll post it here.