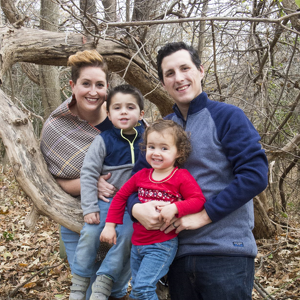 I am a two time survivor of HELLP syndrome and preeclampsia. My husband, Timothy Johns and I were married in 2013 and traveled to Cancun for two weeks for our honeymoon. Everything about that vacation was perfect, and when we got home we learned a few weeks later that I was pregnant.

Aside from PROFOUND fatigue, I had an easy pregnancy. I didn't gain weight, no sickness, nothing. I was extremely nervous throughout the beginning of my pregnancy, but by the time I was 20 weeks we had a reveal party, learned that we were having a little boy, and my anxiety began to decrease.

At 22w2d my husband and I went out and bought all of his furniture- I had found the exact dresser set I was searching for at a second hand shop. I had ordered my breast pump, way ahead of time, and so many generous friends and family had gifted items for me and the baby...things were looking up! I went into work on a Monday morning, 22w4d pregnant, and just felt like there was a rock sitting just below my rib cage. I couldn't put my finger on what the feeling was. The feeling didn't subside throughout the day and by the time I went home I just wanted to rest. By 9pm, the rock had turned into a boulder and I was starting to feel pain that made it uncomfortable to lay down. My on-call OB suggested it was likely reflux and to take tums and call back if it got worse. At 10pm, my OB called me, and while I didn't think it was better, I didn't want to be the squeaky wheel. By 11:30pm, I could no longer lay or sit, and I had moved downstairs onto the couch to try to sleep. I began pacing my living room, wringing my hands and realizing that something wasn't right. The panic was setting in as I told my husband we needed to go to the hospital "right now."

That night I was diagnosed with preeclampsia, with my blood pressure at 175/105 as I arrived at the ER. I was put on bed rest and mag sulfate immediately and my pain grew to unbearable. Early the following morning I learned more. The hospital Maternal and Fetal Medicine doctor came into my room and said, "You have HELLP syndrome. You have to deliver your baby now. He may cry out, but he will die." I was floored. First that someone would even say that to me and second, in disbelief that what she was saying was true.  I remember looking desperately at my nurse as she stood at the foot of my bed just looking at the doctor.  Eventually I spoke with my OB who educated me and explained that women die from HELLP syndrome and if I didn't deliver my tiny baby at that moment, we would both die.

My labs grew increasingly worse and I was induced. I continued on mag sulfate to try to prevent seizures and stroke and had to be held up by my nurse to have a reluctant anesthesiologist place an epidural as I began bleeding and my platelets were dropping to 74. I developed pulmonary edema and started to have trouble breathing, and felt my heart break as I got to listen to my son's heartbeat one last time. What made it so much worse was knowing that I was sick and he was perfect. My husband conceded in the name debate and before he was born we named him Vincent Alexander. Vincent was born the day before my birthday/Thanksgiving on November 27, 2013 at 2:39pm weighing 11.2oz and was 10.5" long. We held him for almost four hours as we waited for his cord pulses to stop, and at 6:35pm, he died in my husband's arms. I left the hospital 3 days later without my baby.

I was pregnant again before Vincent's due date. This time I was being followed closely by an amazing MFM and OB who took my concerns and my history very seriously. And I had met a fellow survivor, Tina​, who went through every phase with me, as she was having her rainbow, due just a few days after mine.  I had monthly growth scans and OB appointments, a relatively easy pregnancy, but started to develop some pretty significant SI join pain and had trouble walking. I had been on an aspirin regimen since before I tried to get pregnant and I hoped that if anything happened, we would learn quickly, but knew that in the end, there was nothing I could do to control this.

My blood pressure started to get a little wonky around 29 weeks. I had several visits to the ER for monitoring and couldn't decide if my BP was legitimately high or if it was just anxiety. My OB was busy delivering babies at the hospital on the day of my 34 week appointment so she had her office call me to tell me to come see her at the hospital. My blood pressure when I arrived was 160/110. I laid on my left side for almost an hour with constant BP monitoring and again started to feel the panic set in.  This couldn't be happening again.  She told my husband to drive me straight to a neighboring hospital with a NICU for a 24 hour urine (my sixth of the pregnancy) and BP monitoring. "If you come back with protein or your pressure doesn't come down, you're having this baby and you'll have a c-section." I convinced myself that my BP meds would be increased and off I'd go.

24 hours later my protein came back at just over the threshold of preeclampsia and my blood pressure never stabilized to a safe level. My MFM had stayed late to get my results, consulted with my OB, and at 8:10pm on November 11, 2014, my second son, Jackson Eli was born at 34 weeks, 5lbs11oz and 17" tall. He was taken away and to the NICU where he spent the first 22 days of his life. Once again, I left the hospital without my baby.

My third and final high risk pregnancy ended at 37 weeks without preeclampsia or HELLP syndrome. Mid pregnancy I changed my OB practice.  My amazing doctor had joined a practice but the whole 32 weeks I was with them, no one seemed to be on the same page.  I was constantly reassured that everything would be ok, but no one agreed on a plan.
At least one of the doctors hadn't even ready my chart!  At 32 weeks I went back to the practice that delivered Vincent and began seeing the doctor who was in the room with the hospitalist as I delivered Vincent (whose hand print had been bruised onto my abdomen as he has pressed so hard during my delivery).  Although my blood pressure was labile for most of the pregancy, I never developed the one illness that terrified me and made me fear for my life and leaving my husband and son without a mother. My daughter Edith Anne was born at 6lbs6oz and 19" tall and I held her on my chest as I was wheeled out of the OR, knowing that I would never have a baby again. Less than 48 hours after her birth, we left the hospital together.