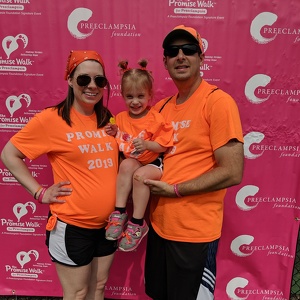 Our team is grateful for your donations and for your help in spreading the word. Want to join our team to make strides? Just click the "Join Our Team" button and register! Registration to attend the Promise Walk is free to all participants.

I am now 5 years away from my experience with preeclampsia, but the truth is, it’s still very close to my heart and in my mind. I see it in my daughter’s face every day. As a result of this pregnancy complication, she was the tiniest baby I had ever seen. I actually had heard of preeclampsia when I first became pregnant, but what I didn’t know was that now that I had preeclampsia, our daughter is at risk for having it when she’s ready to have her own family. For her future, especially, we walk.

My baby and I made it. We now know some who haven’t. Babies and mothers are dying from this terrifying complication (& other hypertensive disorders during pregnancy). I owe my life and our daughter’s lives to the doctors who had monitored us so closely during my pregnancy & recognized that my symptoms were not going away.

Most people who know us know our story already, but for those of you who don’t, here’s a quick summary: I was pregnant with our first baby (surprise gender) & I was due on Valentine’s Day, 2015! “How cute!” right? Instead, my body decided to work against me & the baby – I had developed IUGR – growth restriction in the placenta – and at 32 weeks my blood pressure spiked high enough to send me into the hospital overnight. I was given a set of steroid shots for baby’s lung development and “luckily” sent home the next day on a decent dose of Labetalol twice a day, every day. My blood pressure continued to move towards “severe” – without me feeling or showing any outward symptoms. Once again, after my MFM appointment (which was then quickly added to my prenatal care), I was admitted on January 2. By the next day, January 3, I was told for sure I had to deliver in order to save myself and our baby. So instead, our “Valentine” was born via emergency c-section exactly 6 weeks early. I couldn’t believe we had a daughter when she let out her little cry! She made me a “preemie mom,” my husband a “preemie dad,” and, with the extraordinary care of the nurses and neonatologists over those 24 days in the Special Care Unit following her birth, Samantha grew and came home with us safe and sound. She is now 5 and thriving. With the care of my own doctors and seeing a therapist regularly to conquer my fears, I was able to become a mother again, without complications, delivering at full term last July. Samantha became a very loving big sister to her little brother, Andrew!

Keep scrolling for more in depth details of our preeclampsia experience – the days following a whirlwind premature birth. It’s so important to remember that not every (preeclampsia) story is the same – not every story has a happy ending.

When you’re expecting your first baby – you get nervous – as expected. You do “all the things.” Take prenatals, take pictures of your growing belly, take maternity pictures, have a baby shower, take childbirth classes and go on a tour of the hospital. But what you don’t expect is when you “breeze by” the NICU/Special Care Unit of the hospital, you could wind up with your child in “that place.” That’s what I thought – “we won’t need that place.” Well, “that place” saved our daughter.

At 34 weeks, when we had Samantha, baby’s brain and lungs are still not fully developed. Did you know that? I remember a nurse explaining it to us on a chart on the wall in the Unit. I was flabbergasted. I hadn’t thought of it in that way before. Sure you look at your pregnancy app and see how baby grows each week from a poppy seed to a watermelon, but that’s just for “fun.” This was real. Our daughter was 3lbs., 4oz. (less than a big package of sugar!) when she was born. I didn’t get a watermelon in the end.

Her birth shocked me to the core and rocked our world. I had just had major abdominal surgery. I felt lost, I felt like I was visiting someone else, and I was in so much pain. Pain in two ways. Physically from the surgery (I couldn’t even stand up to see her in the isolette in the first few hours) – physically from pumping breast milk around the clock – only for her to take less than an ounce at a time (and then developing mastitis on top of it!) and emotionally – what a roller coaster. It’s cliché, but true. Sadness, anger, happiness, stress and relief were all on the spectrum. They don’t tell you this in baby books.

We spent every day for 24 days by our daughter’s side for hours at a time. First she was in the isolette with a feeding tube in her tiny nose (which she pulled out a couple times!), an IV in her skinny arm (which eventually moved to her foot), wires attached all over her chest and belly, and on day four, they called her the “blue light special” for treating jaundice (that’s still one of my most favorite pictures of her because she looks like she’s on the beach with sunglasses). I “got to” hold my own daughter on day 2. On day 16, she was able to sustain her body heat and was in an “open crib” and the feeding tube was removed. When she got the hiccups and grabbed my hair on day 22, I never laughed and smiled so much. There was also disappointment a few times. We thought, “Today is when we get to bring her home,” but then she would have “another episode” – either a “brady” or apnea. Words I never really heard of or paid much attention to before. (Thank you, NBC’s ‘This is Us,’ for bringing those words to the spotlight in season 3!) Who would have ever thought, “my child needs to pass a car seat test” in order to go home? She spent those days growing to a weight allowable to be discharged. Then, closing in on 4 weeks, we got a snowstorm at the end of January, and my husband and I tried to stay in the Unit all night, but ultimately had to leave. The next day, January 27, we were able to bring our Little Miss Peanut home!

My birth story had a raw beginning, a bittersweet middle, and thankfully a happy ending.

So for those of you who are “new” to this pregnancy complication, this is a stressful experience to say the least, and it will probably make you feel alone, but you will get through it. Anyone who hasn’t gone through this before will not truly understand how you feel. I went to a therapist who diagnosed me with PTSD soon after we brought our daughter home, but I wasn’t able to be home with her for very long before having to return to work. Having your pregnancy and “maternity leave” cut short, the baby not with you at home and your own body defeating you ultimately changes you. It’s up to you to decide HOW it will change you.

Please help spread awareness to save moms and babies. Any woman, any pregnancy!