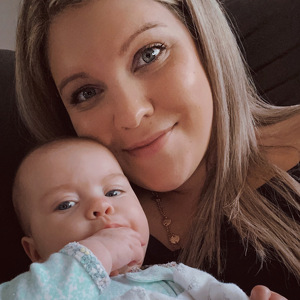 Thank you for visiting my 2021 Promise Walk for Preeclampsia fundraising page. I am grateful for your donations and for your help in spreading the word about preeclampsia. My goal is to help our community raise funds and awareness and save the lives of moms and babies! Please make a donation to support our efforts to fund education and research into this life-threatening disorder of pregnancy.

The last 3 weeks before I delivered Kennedi, I began to have increased swelling in my extremities and just felt “off” like something was not right. Knowing the signs and symptoms of preeclampsia, I decided to take my blood pressure and sure enough it was high. The doctors began doing labs on me to see if I had preeclampsia and the protein in my urine proved that I did. I was given 2 rounds of steroid shots to help develop the baby’s lungs in the event she came early-it would give her a better chance at surviving.

I was pulled out of work on 12/28 to try and keep the preeclampsia at bay. It worked for a short while until my body began to take a turn. New Years Eve I tried to relax all day while Kale was at work but the shortness of breath and chest pain that started was getting hard to ignore. At 11:30 pm I took my pressure again and it was the highest it’s been so my doctor told me to go to Oishei to be evaluated.

I looked at the clock on our way out the door— 12:00 midnight. “Happy New Year” Kale and I said as we walked out not knowing what this hospital trip and New Year would mean for our family.

We got to Oishei and they immediately started monitoring the baby and running bloodwork and I was admitted.

Doctors and nurses came in and out of my room all night doing consults and taking assessments. I was put on a magnesium drip that is supposed to help with blood pressure and prevent seizures and it made me feel like I was 1,000 degrees and extremely foggy. At this point it was 5am, Kale had been up for over 24 hours and the hospital was no place to sleep. I was stable and doing just fine so I told him to go home and sleep for a bit.

Within two hours of him leaving, I started to tank. The pain I developed in my upper abdomen was like nothing I have ever felt before. Every breath in was exhaled with a groan of excruciating pain. Something was changing in my body at it was not good. I called Kale crying at 7 am asking him to come back to the hospital. I felt like I was dying and it’s because essentially, I was.

Every 4 hours they checked my labs and each time they got worse. My liver enzymes were skyrocketing and my platelet count was tanking. Essentially, my organs were starting to shut down. The doctors came in my room around 10 am. I cried to them saying I needed this pain to end. This is the first time they hinted Kennedi would be delivered that day. They had to check my labs one more time at 12pm and they wouldn’t come back from the lab till around 1pm, so another 3 hours I laid there waiting for the results to come back. It was the worst 3 hours of my life, unable to think of anything but the pain.

My labs came back just after 1pm and it was time, my labs were shooting up and this baby needed to come out now. “We are going in the OR in 10 minutes” will live in my head forever. Everything was frantic at this point. Anesthesia was letting everyone know they had blood waiting on reserve in the OR incase I hemorrhaged during surgery.

Because my platelets were so low, they said it was too dangerous to perform a c section with spinal anesthesia. I would have to be knocked out under general anesthesia-which meant Kale could not come back for the surgery. I was so scared. I have never been put to sleep or had surgery in my entire life and I was about to have both in an emergency situation and have to do it alone.

Kale and I prayed together before they wheeled me out. As hard as it was for me I, knew it was hard for him too. Seeing his whole world being wheeled out and because of COVID he had to wait all alone in my labor and delivery room not knowing what was going on.

I remember entering into the OR and seeing OR 57 above the doorframe. The nurse yelled out “time in 13:32” as we went in. The lights were so bright and the room was cold and sterile feeling. I got onto the operating table and the pressure and pounding I felt in my head was almost unbearable. I remember telling the nurses “please don’t let me die” - I was so terrified.  The oxygen mask went over my face, I saw a large blue drape go up and felt the cold disinfectant on my stomach.

A few seconds later, I began to get dizzy and started freaking out telling anesthesia I still wasn’t asleep yet, thinking they would start before I was out. The dizziness got more intense and the sound in my ears was as if I was next to massive wind turbine. Then everything went black.

I woke up to Kale’s face and the nurse next to me telling me to wiggle my toes. I remember asking a bunch of questions and Kale showing me pictures of the baby. I remember thinking how perfect she was. Kennedi Elise Wischman born 1/1/2021 at 1:52 pm weighing 4 pounds 12 ounces at 33 weeks 1 day.

I never got to hear my daughters first cry nor do I have any recollection of her birth. I still struggle today with anxiety and PTSD due to the trauma that I faced bringing my beautiful baby girl into this world. My final diagnoses was Preeclampsia with severe features and HELLP Syndrome. Kennedi spent 35 days in the NICU.

Today, I ask that you please do research on Preeclampsia, Eclampsia and HELLP syndrome. It can happen to anyone whether or not you have multiple risk factors or none at all. Early detection is the most critical thing to ensure baby/mother survival. World wide, preeclampsia claims the lives of 500,000 babies and 76,000 women each year.

Kennedi and I are extremely lucky that we made it out alive. Today, Kennedi is thriving and a happy healthy girl and my labs are almost completely back to normal. Thank you to everyone who has supported our family in a time of need. We will forever be grateful for the amazing friends and family. Even more so to my amazing husband that was with me through hell and back. I love you more than anything.