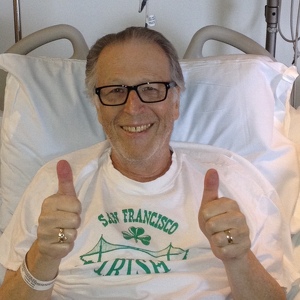 This summer, I'm trekking through the Rocky Mountains to raise awareness and funds for MPN research. I have the honor of carrying forward my dad's advocacy work in his memory, after losing him to MF nearly 8 years ago.

I first learned about MPNs, and specifically myelofibrosis, in 2000 when my father, Harvey Gould, was diagnosed. My sisters Jennifer and Ashley, and our stepmom Karen, began a journey with my dad to understand this disease and what his diagnosis meant. We did our own research, along with the information being provided by his medical team, but information on MPNs was not as readily available then as it is today, so we had to piece the story together bit by bit.

Soon after his diagnosis, my dad was given 5 years to live. But dad was a fighter and a believer in life. I learned so much from him as I watched him bravely fight his disease for the next 14 years. He made a conscious choice to not wallow in the fear and sadness that he sometimes felt, and instead, to fully enjoy his time here. He continued to ride horses and travel, once receiving several blood transplants while abroad. He simply refused to allow his disease to keep him from doing the things he loved. He also dove into the MPN community, and used his voice to spread hope, inspiration and connection to other MPN patients. He spent countless hours writing a blog, “The Long and Winding Road,” to share about his experiences with medications and treatments, as well as his emotional journey navigating the disease and facing his own mortality. He took phone calls from people he had never met, treating them as if they were a long-lost friend and helping them to navigate through those scary first days and months post diagnosis. My dad’s sense of humor would keep the doctors and nurses rolling with laughter, even has he faced his own mortality, and he helped all of us navigate our own fears with his calm energy and positive attitude.

We lost him way too early in September 2014 after a stem cell transplant. He was the first person to win Cure Magazine’s MPN Heroes award posthumously – he was nominated by a person who he had never met in person, but whose life he had touched with his outreach and big heart.

After my dad’s death, I was honored to be invited to join the MPN Research Foundation’s Board of Directors, where I have served for the past 5 years. It is a privilege to carry forward my dad’s legacy as a member of this hike, and I do so in memory of my father, and on behalf of my sisters and my stepmom.