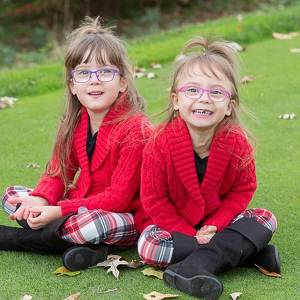 In July 2011, Kellie Hoiness was giddy over her upcoming 21-week doctor’s appointment. She and her husband, Marshall, would learn the gender of their twins. As first-time parents, each appointment was a milestone. They learned they were having baby girls – and that their seemingly normal pregnancy was anything but. One of the twins – Khloe – had blood flow issues. She wasn’t growing properly. Ten days later, the Hoinesses returned for another appointment and learned the blood flow restriction to Khloe had gone from slight to moderate. The pregnancy needed to be closely monitored. Then, just a week later, they learned that the blood flow went from moderate to reverse for Khloe. Kennedy had started experiencing slight restriction, too. At just 24 weeks, six days, Hoiness was admitted to Abbott Northwestern Hospital. Within hours of being admitted, her medical team discovered she had HELLP Syndrome (a potentially life-threatening obstetric complication). The babies needed to be delivered – stat. On Aug, 21, 2011 – at just 25 weeks – the babies entered the world by emergency cesarean section. Khloe weighed 14.8 ounces and Kennedy weighing 1 pound, 4 ounces. Within moments of being born, they were whisked away through an underground tunnel to Children’s Hospitals and Clinics of Minnesota. For nearly five months, Children’s became home for the Hoinesses. In the first 10 days of life, both girls underwent two surgeries. Kennedy had a central line put in through her groin and underwent surgery to close her ductus valve. Khloe had a broviac put in through her neck, surgery to close her ductus valve and was on a ventilator for 9 weeks.Through it all, the couple was impressed by the level of compassion, expertise and dedication the staff demonstrated. Finally, after 113 days, Kennedy was discharged from the hospital. She came home on medication for high blood pressure which lasted for 2 ½ years, but has been off the medication and is doing Great! About 20 days later, Khloe was able to also go home. Khloe left the hospital aspirating (liquids she was consuming would “go down the wrong pipe” and enter the airway or lungs causing her to choke. Due to this, we had to thicken all liquids for Khloe until she was 1 ½ years old. She was also taking reflux medication until the age of 4. Both girls wear glasses for farsightedness. We were blessed that the doctors were so attentive to what was happening to both the girls and Kellie. We call our daughters the “The Hoiness Miracles.” (Today, our girls are 6 years 7 months old and doing Great! They are busy going to Kindergarten, running, singing, jumping,dancing, reading, enjoying swimming, skating, golf, basketball, gymnastics, and just being goofy 6 year old girls! )