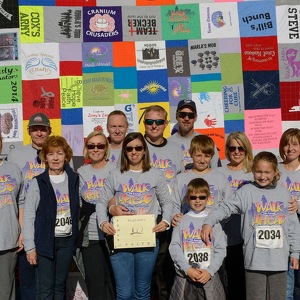 2019 Walk Ahead for a Brain Tumor Cure

Why we Walk Ahead for a Brain Tumor Cure

Almost 18 years ago I found out I had a brain tumor.  It had most likely been growing since I was younger.  I had my first seizure at age 2.  We still aren't sure if the seizures are related to the tumor, but if so, I had the tumor for a long time.  On September 14, 2001, I chose to have it removed to see if further treatment would be needed.  Dr. Tew was wonderful and believed he removed the entire tumor at that time.  God blessed me with one of the best types of tumors it could be.  My type of tumor is a Grade II Oligodenroglioma.  What a mouthful right?  I did not have to do any further treatment except yearly MRI's to monitor for re-growth.  So, I got to go in every year and pray for the best.

Every year I was told there was no change until I had a seizure in 2014.  Then, I was monitored more often.  Each year since then, there have been "subtle changes".  In January 2019, the tumor board at Mayfield Clinic met to review my case.  At that time, they suggested a second surgery.  Of course, I was like get me a second opinion now!  So I did. The team at OSU met and said the same thing.  I went to a neuro-oncologist and he agreed too, and so did the second one!  Then I was like, WELL DARN!

The rationale to have another surgery ASAP, despite the fact that I am not having any real signs or symptoms, is that the more cells that are present, the higher the risk of the tumor changing and becoming more aggressive than it is now.  We have been told by the AWESOME team at Mayyfield Clinic, led Dr. Vincent DiNapoli, that he was able to remove the entire tumor!!  Genenetic typing has been done to determine if further medical treatment will be necessary.  We got the most amazing news on August 27.  I had my appointment with one of the best neuro-oncologists in the world (in my opinion), Dr. Richard Curry.  He informed us that, at this time, he does not think further medical treatment (meaning chemo or radiation) will be necessary!!  Yippee!!

However, the likelihood this type of tumor will re-grow is high.  Time will tell.  Through all of this God has been at my side.  I know there is a greater purpose for me in this and I pray for Him to guide and use me every day.  Many people say that they don't know what they would do in this situation.  I had a minor medical procedure in spring of 2014.  I literally said that "I don't know what I would do if I ever had to have a major operation like brain surgery".  I am not kidding!  Exactly what I said!   I remember saying it like it was yesterday.  Four months later, I was in a hospital bed having a brain tumor removed.  I remember thinking, "God you sure do have a sense for humor".  Well, I found out what I would do in that situation.  I made it through what I thought I wouldn't.  I am twice as strong now.  I am so grateful that I have God to teach me and show me that I am stronger when I give it to Him and trust He's got this.

I am still having some trouble on my right side as I am pecking at the keyboard.  I am working through it because I know God as a plan.  I have been shown more love and support than I ever thought possible.  I hope to give back to others the way that so many of "my angels" have so freely given of their time, cooking, daycare, yard work, laundry skills, and the list goes on.  Five years ago, I was at a follow up appointment for an MRI and found out about Walk Ahead for a Brain Tumor Cure.  In 2016 and 2017, I had a team to walk with me to help raise funds for a cure for me and so many others with more aggressive tumors.  I missed last year, but I am trying to gather a team again this year.

Thank you so much for visiting and for your love, support and prayers!

We don't know how Strong we are until being strong is the only Choice we have.

Now all glory to God, who is able, through His mighty power at work within us, to accomplish infinitely more than we might ask or think.  Ephesians 3:20