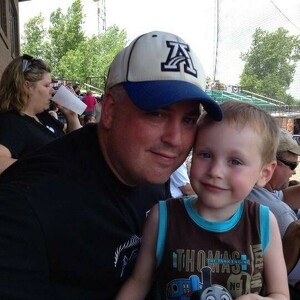 2019 Walk Ahead for a Brain Tumor Cure

Why we Walk Ahead for a Brain Tumor Cure!

Join us as we Walk Ahead for a Brain Tumor Cure on October 20!. We walk and run this 5k event every year for Jeff Hurt. He was my husband. Jeff lost his battle to brain cancer on December 16, 2014. He was a wonderful Husband, Father, Son, Brother, Cousin, Nephew, Friend, and Coach. He was diagnosed in November 2004, he went through 2 brain surgeries, no chemo or treatments needed. The cancer was not aggressive. He did great. September 2012, the cancer returned and he had his 3rd surgery. All went well but we were told the cancer had became aggressive. Jeff had to undergo serious radiation treatments and chemo. The following year, we were told that the cancer was back and surgery was not an option. Jeff went through many different types of chemo and even traveling to Philly to undergo another type of radiation at the Cancer Treatment Centers of America. We made multiple trips. There came a point where the traveling became too much being Jeff's mobility was affected, he was exhausted, and the chemo wasn't as effective. Jeff tried rounds of Chemo here in Cincy but the effects were so overwhelming and the chances of it killing the cancer, were extremely slim. We were told it will return. Spring of 2014, Jeff went onto home hospice care. He fought so hard, we tried to enjoy the time we knew that was going to be short.

On December 16, 2014 I lost my best friend due to this terrible disease. Our world changed forever. The following year, in October 2015, our Team #Jeffstrong did our first 5k run & walk in his honor. Raising over $1500. Please help us go over the goal this year! We need to find a cure for brain cancer and with your help, we can get closer to reaching this goal. Jeff was an amazing person. He had the biggest, most kindest heart of anyone I have ever known. He always worked hard for his achievements. He attended Hanover College in Indiana, majoring in Business Finance and played baseball. He ended up returning to Cincy an finished his Bachelors Degree in Business Finance at the University of Cincinnati. He went on to work as a Consultant for Accenture located in Downtown, Cincinnati and later became a Senior Project Manager for American Modern Insurance Group. He also coached our son Logan (he was age 4-5 at the time) and his nephew Austin in Baseball.

Our son Logan is now 11. He has played baseball since age 4. It is his sport! He will go to a select team next year. Austin is now 18 and goes to UC and plays baseball for the University of Cincinnati and received scholarships upon his high school graduation. Jeff would be so proud of these 2 boys. Jeff had coached the select teams his nephew played on years before including Midland and The Flash along with being the Varsity Baseball Coach for 5 years at Amelia High School, now known as West Clermont. Jeff coached Logan through i-9 Sports for 2 years. Jeff was an active runner. He ran many marathons including the Mini Heart Marathon, Flying Pig, and the Thanksgiving Day Race.

Jeff was also very strong in his faith with God and was passionate about helping others even when he was at his worst. He is so missed!!! I feel for any family who has to go through this nightmare and losing a loved one. We miss him every day and wish he could be here. There will always be a hole left in our hearts. Let's find a cure for Brain Cancer!! Any donations are very much appreciated!!!