On July 15th, 2021, the National Weather Service confirmed that the severe weather experienced in Fredericksburg on July 14th was a powerful microburst that caused extensive damage across the region.  Included in the damage was  Shannon Air Museum's very own DC-3 the "Stars & Stripes".

Pictures of Damaged Tail of the "Stars & Stripes" 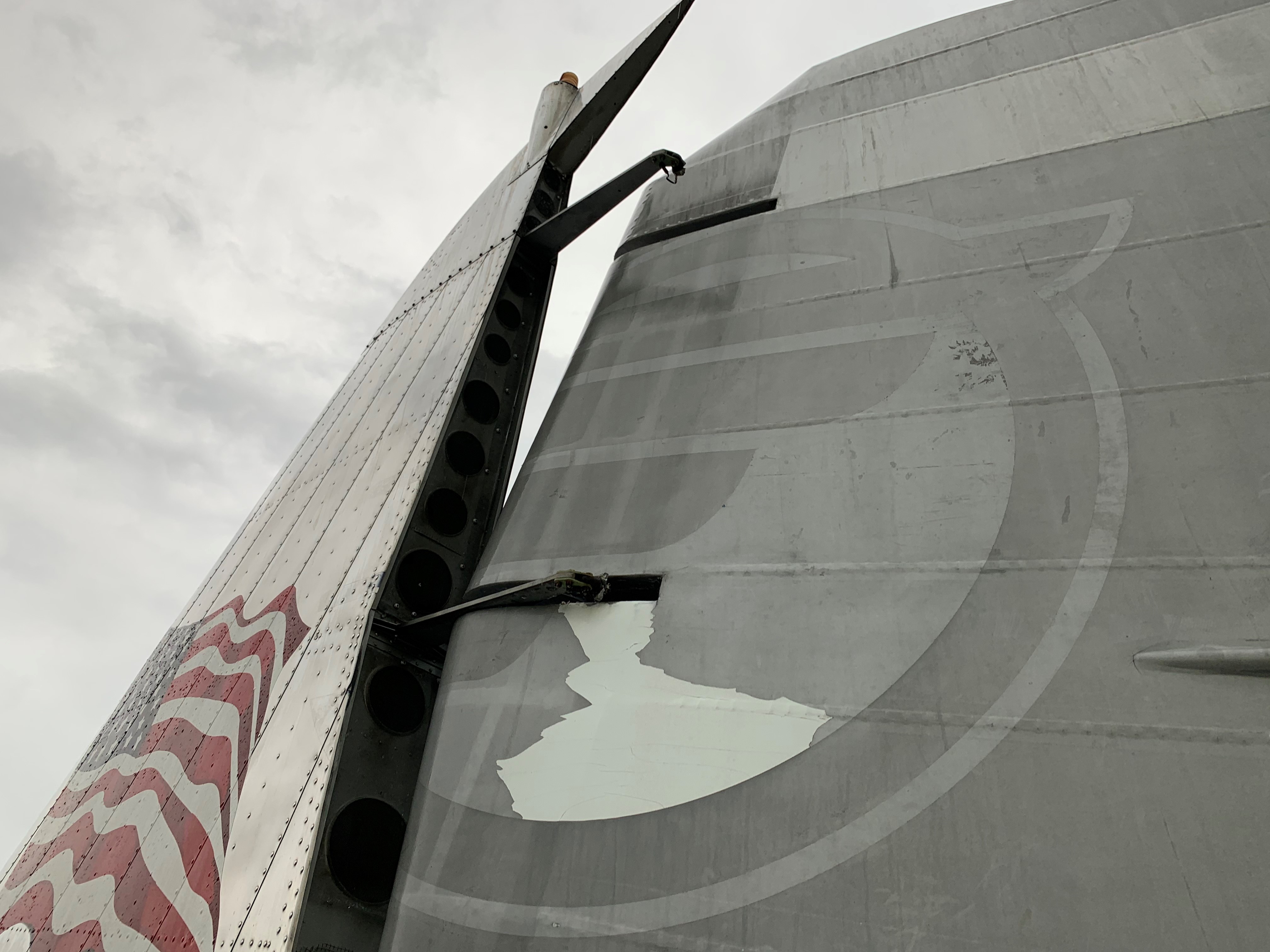 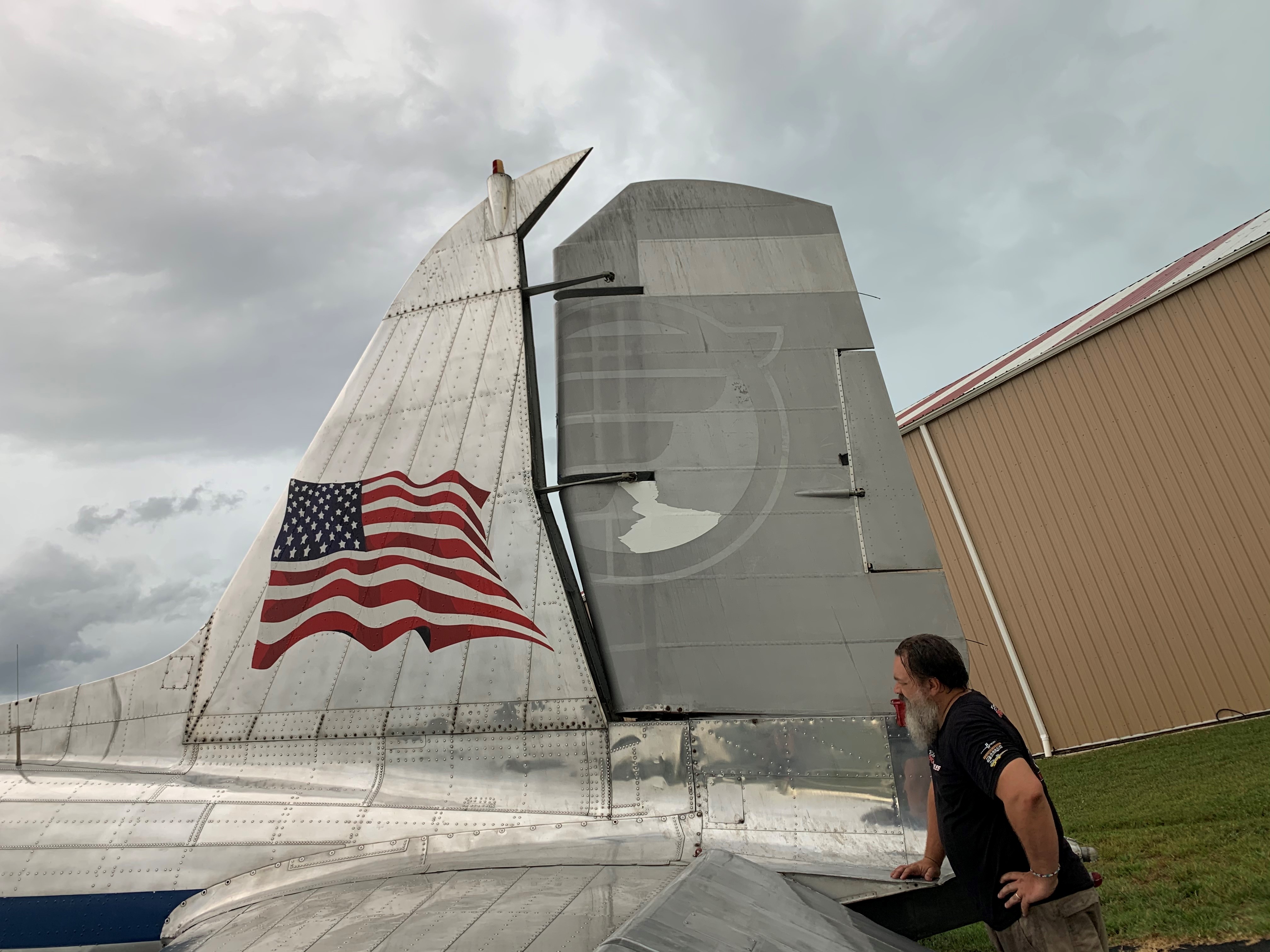 JULY 14TH MICROBURST at SHANNON!!..the tail of the "Stars & Stripes" can be seen on the left side of video

Click to Donate to Repair & Restore the "Stars & Stripes"

The Incredible Story of the “Stars & Stripes”

1971 saw the airplane again sold to Air New England where it operated for 6 years until Cryderman Air Services, Inc. purchased it in 1977. Cryderman was located in Pontiac, Michigan. Cryderman operated the airplane only about 1 year when it was sold to Century Airlines, also of Pontiac. On June 13, 1978 Century Airlines sold N25666 to Pvovincetown-Boston Airlines who registered the airplane as N139PB. This famous airline operated until the mid 1980’s as a seasonal carrier. They operated out of Cape Cod, Massachusetts in the summer shifting to Naples, Florida during the winter. N139PB was an integral part of the airline.

N139PB also functioned as an Eastern Express airliner until the bankruptcy of Eastern Airlines. The airplane was then placed in moth balls at the Tamiami, Florida airport. The airplane sat there until Starflite Corporation offered the DC-3 for sale in Trade-A-Plane. Ron Alexander, owner of Alexander Aeroplane Company, purchased the airplane from Starflite on July 18, 1991. The airplane was ferried to its new home at the Griffin, Georgia airport.

N139PB was completely gutted and refurbished by Ron and Alexander Aeroplane employees. The process took almost 1 year to complete. Ron then registered the DC-3 as N28AA, the last two letters indicating Alexander Aeroplane. The airplane was then used as a promotional tool for the company flying to airshows throughout the country and being placed on display. Hundreds of people enjoyed touring the airplane and riding on it. A program was developed allowing pilots to rent the airplane for a day to receive ground and flight instruction. This provided the individuals with a taste of what it was like to fly this beautiful airliner. January, 1996 Alexander Aeroplane Company was sold to Aircraft Spruce and Specialty. Ron kept N28AA and began using it for instruction. Ron also owned Poly-Fiber Fabric Coatings and painted the company name on the fuselage.

This airplane has over 82,000 hours on its airframe. If it could talk I am quite sure it could tell many interesting stories of flights in icing, thunderstorms, low ceilings, etc. It has provided a taste of history for many people to enjoy. It has even been used as a place to host a wedding while flying around the sky. Ron was also the Chief Pilot for the Delta Air Lines DC-3 program for several years. During that time N28AA was used to instruct the pilots involved in the Delta program.

The DC-3 played a vital role in airline history. It was the first airliner to successfully carry passengers and make a profit. The airplane was designed by the Douglas company in 1935. The technology used on the DC-3 remains in use on many modern day airplanes.