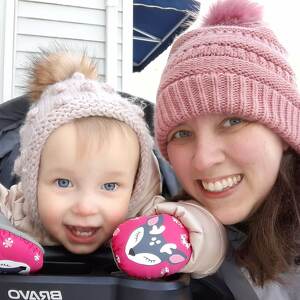 Thank you for your support!

When I woke up on April 19, 2020, I had no idea that was the day we were going to meet our sweet girl. I had been experiencing some swelling for several days, but my OB had told me at a virtual appointment days earlier that swelling was normal in the 3rd trimester. That morning I woke up with blurry vision. After calling and consulting with the on-call OB, I was advised to head to labor and delivery triage to get checked out. Brian dropped off me at the front door of the hospital and went to wait in the parking garage, as COVID protocols at the time did not allow for him to come in with me initially. My blood pressure was through the roof when I arrived and they started administering medication to try to regulate it as well as magnesium to keep me from having a stroke or seizure. I also received a steroid shot to help our baby's lungs.  Luckily the on-call doctor decided I should not be alone and had me call Brian to come up.

We spent a few hours in triage before they made the decision to transfer me to another hospital that had a NICU and we were told the goal was to get me to 34 weeks(I was 31+2). Brian went home to grab some lunch, get things to spend the night(I literally had my wallet and phone), and take care of the cats (he also apparently spent some time researching preeclampsia which is a very Brian thing to do).  About an hour after I arrived at the new hospital(around 3 PM), my OB came into my room to tell me that an emergency csection needed to happen. Brian had not arrived yet, but she assured me we could wait for him to get there. At 4:11 PM, our sweet Sophie June made her way into the world weighing 3 lbs 6 oz.. She cried soon after birth and Brian was able to see her before she was whisked away to the NICU. I didn't get to see her until almost midnight that night and didn't hold her until the following evening. I was very sick that night and Brian bounced between me and Sophie. The next morning after 3 failed blood draws, I had a PICC line. I'm a hard stick on a normal day, but being swollen didn't help at all. They did many blood draws and my liver and kidney function was not improving.

On Tuesday afternoon, I was tested for COVID as I was still very sick and had fluid in my lungs. I was placed into isolation until my test results came back. I was unable to see Brian or Sophie but he was able to visit her. I remained in isolation until Thursday morning when my results came back as negative. My bloodwork slowly started to improve and they were able to control my blood pressure with medication, so that I could go home the following Monday after an 8 day hospital stay. Leaving our Sophie girl at the hospital was one of the hardest things I have ever done. Her NICU stay was much shorter than originally anticipated and she came home after 25 days. I stayed on blood pressure meds until about 4 weeks postpartum. I have been told that I have a 25% of developing preeclampsia and HELLP in future pregnancies. I feel like there is not enough education about preeclampsia and HELLP and that my case may have been caught sooner if it wasn't in the midst of a global pandemic.  I am passionate about educating others and raising awareness  and I hope you will join to raise money for the Preeclampsia Foundation!

Donate Now Get Your Own Fundraising Page