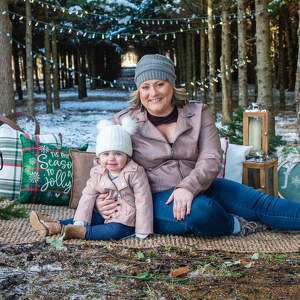 Join me in raising money for an organization and cause that is close to my heart.

This will be our second year participating in the Cleveland Promise Walk. As a survivor of Pre-E and HELLP, seeing other families that were affected by this was incredibly encouraging. One of the feelings I felt the most during my experience was isolation...and that's not because I was alone or didn't have any help. It was quite the opposite. However, no one can give you back the "normal" birth experience that you miss out on when you go through something like this. There are no cute pictures of me and my husband laboring in the hospital. No last walks down the hospital hallway with my pregnant belly. No munching on snacks while patiently waiting for our peanut. In fact, there is only one picture of me holding baby girl in the 24 hours after birth. Why? Because the meds had me so jacked up I could hardly stop shaking long enough to hold her. The videos I have of her? You can hardly watch them because the phone was shaking so bad.

I had a relatively normal pregnancy up until the middle of my third trimester. At that point, they diagnosed me with gestational hypertension and I was going for weekly NST's and ultrasounds. I shrugged most of it off because the doctors shrugged it off. Then 36 weeks rolled around. My appointment was in the morning and I felt pretty good, but my BP was sky high so they sent us to the hospital. Once we were there, they told us we were being induced but not to worry and that once the baby was here, my pre-E struggles would be long gone. Then came the awful mag drip and honestly most of my labor experience is a giant blur. Baby Audrey arrived a little over 24 hours later and relatively unscathed and itty bitty. My BP returned to normal and we were discharged about 36 hours later. Insert a round of jaundice and 2 additional days in the hospital and we were discharged again thinking we were finally in the clear.

When I finally got in with my doctor for a quick BP check, it was obvious that wasn't the case pretty quick. My BP was up in the 190's/90's range and they immediately sent me back to the hospital. I missed Audrey's first pediatrician appointment, I had to cancel newborn pictures, and a horde of eager visitors. Worse than all of that was hearing the doctor come in to tell me I was eclamptic, could have a seizure at any moment, showing signs of HELLP and that it would be a long road. She also said that I was no longer able to hold my 4 day infant without a nurse being in the room - the worst sentence I think I have ever heard. Three days later, after multiple mag drips, countless nurses and doctors, more bloodwork, another catheter, sleepless nights, anxiety every time the BP cuff would tighten, little to no food, medicine adjustments...we were discharged again.