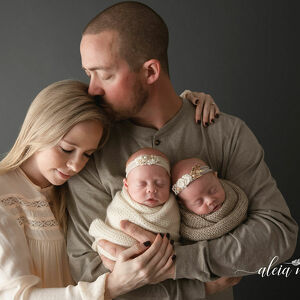 My husband and I found out we were pregnant with identical twins in April 2019. As a twin myself, it was a dream come true. Aside from carrying monochorionic/diamniotic twins, my pregnancy was fairly uncomplicated until 28 weeks when I was diagnosed with cholestasis of pregnancy. Cholestasis is a liver problem that causes extreme itchiness (think 3 showers a day, unable to wear clothes, can't sleep kind of itchiness) and presents potential problems for the developing fetus, or in my case - fetuses.

Since I was carrying twins, I was being monitored very closely. During one of my biweekly medical appointments at 34 weeks, I presented moderately high blood pressure. Due to this, and elevated liver enzymes, I was admitted to the hospital, and received a blood test and urine analysis, which did not present findings for preeclampsia.

I remained in the hospital for 5 days, experiencing high blood pressure, vomiting, severe swelling in my feet and legs, mild headaches, and eye floaters, but was consistently told by medical professionals that I did not have preeclampsia due to my labwork results. Instead, I was told that I was stable enough to return home and that my symptoms were associated with stress, "being tiny", and "just being pregnant". On the 5th night of my hospital stay, I experienced chest pain and extreme shortness of breath. I received a chest x-ray and an echocardiogram, which showed fluid in my lungs and an enlarged heart.

I was incorrectly told by medical professionals that I was in the late stages of heart failure and likely had a condition that presented future heart disease postpartum. I was then transferred via ambulance to a Philadelphia university hospital. Shortly after admission and tests at the new hospital, I was advised that not only did I have preeclampsia, but I had severe preeclampsia due to pulmonary edema. I then received an emergency c-section within 24 hours and delivered my identical twin girls at 35 weeks.

My birth story turned into a 9-day hospital stay and ended with a mild case of bell's palsy, but more importantly, with the birth of two healthy girls. Due to my experience, I would like to raise awareness for pregnant women with high blood pressure, but who do not present the "typical" signs and symptoms of preeclampsia, as well as raise awareness of the potential risks for women carrying multiples.