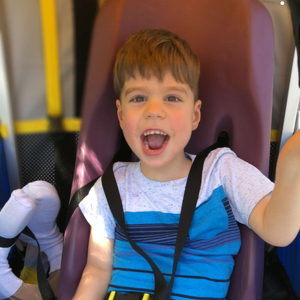 Many of you know our sweet Theo. He came in to the world with a bang and rocked the world of people near and far, praying for his life and his health. We were so fortunate to have so many prayers and so much support for him since the very beginning.

In September of 2016 when Theodore was only 2, he had his first seizure while at daycare. It was a terrifying experience. Then, in March of 2017 he had another, even worse, even more terrifying seizure. The Summer of 2017 was a rough one as Theo battled the fatigue of having multiple seizures a week and many new and changing medications, and our family adjusted to this new challenge. Theodore's seizures at first seemed to happen with sleep. This taugth me as a parent how to sleep very lightly or not at all for several months on end until we found medications which helped control the seizures.

We are fortunate that we have been able to control his seizures with medications for months at a time, but we live in continuous fear that another seizure could come at any moment. We must always be prepared with emergency medications, oxygen and skills to act fast when one strikes.

We walk to support our Sweet Theo and we walk because he we know he is not the only one that needs it. It is important that we support foundations which provide research and resources to those who desperately need it. We have had resources visit with Theo's preschool class for the last two years and plan to have them back next year to educate not only his classmates, but the staff as well on seizures and how to care for individuals with them.

If you can, please consider making a donation in support of Theodore and all of the others out there battling epilepsy.