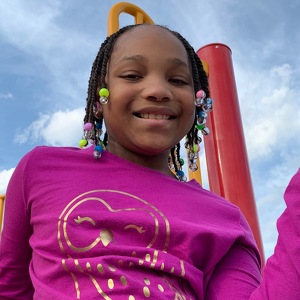 Lauryn was diagnosed with Type 2B Von Williebrand Disease in 2016, but the process to get there was long and hard. From infancy, Lauryn experienced severe nose bleeds and bruising. We can remember waking up in the middle of the night on several occasions, only to glare over at the monitor and notice that her crib and body were saturated with blood. We would pick her up from daycare with bruises and questioned the centers ability to properly care for our child.

Leading up to her second birthday, Lauryn was very stoic and disoriented. Christmas came and she barely played with her new toys. As a matter of fact, she just wanted to lay around and be held. Those next few days were the scariest days of our lives. We took her to urgent care and the doctor took one look at her (no examination) and said she needed to be in a hospital. We scheduled an appointment with her primary care physician for two days later (this was New Year’s Eve, so they were closed on New Year’s Day). They thought that Lauryn had caught some type of virus or infection. Before releasing us however, they checked her hemoglobin level. To their surprise, her numbers were extremely low, shocking in fact. The doctors were shocked that she was still walking around. They told us to go home and pack a bag. They alerted Children’s National emergency room that we would be on our way. Well, we’ve been to Children’s emergency room before, but this was the first time that we were ushered straight back to be seen. We realized the seriousness of the situation in that moment. We like to talk straight, so after listening to the doctors, we were certain that they were either looking for sickle cell or some type of cancer. Lauryn received several blood and platelet transfusions that evening. The next day she underwent a bone marrow aspiration. We felt scared and helpless, but we knew we were in good hands and as a family, we were prepared to walk down whatever road we had to in order to get Lauryn well. To this day, she is still seen by one of the doctors who met us in the emergency room.

Fast forward, Lauryn is (for the most part) a healthy and active eight-year-old (almost too active if you ask us). I know this is a direct result of the partnerships we formed with her healthcare providers, school, and local HACA group. We have been proactive in trying to educate ourselves about her disease and have since become advocates in our local community. We are Christians, so we believe that God has placed a purpose on Lauryn’s life through this disease. We no longer look at it as a burden or limitation, but as an opportunity for us to help inform and advocate on the behalf of others, particularly communities of color. Please consider joining us for the walk or donating! Thank you!