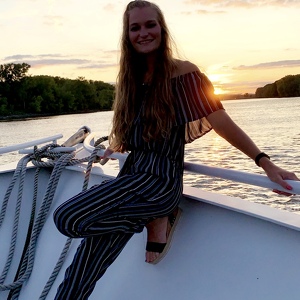 I started having seizures in 2003 when I was 4 years old.  At first they started out as simple partial seizures, but later progressed to complex partial and tonic clonic seizures. An MRI showed that I had a brain tumor in my right Temporal Lobe.  My neurologist determined that the best course of action was to have brain surgery. My neurosurgeon successfully removed the tumor, but after about 2 years, it grew back. I had a second brain surgery in 2005.  During this time, I missed a lot of school and had to receive outpatient speech and occupational therapy to regain some of my verbal and fine motor skills.
While I had to continue to take numerous seizure medications, my epilepsy was well controlled for over 7 years.  In  2012, the seizures returned and scans showed I had three brain tumors.  I had  brain surgery #3 on Nov. 14, 2012. My surgeon was able to completely remove two of the tumors, but the third tumor was located too close to an artery to be completely resected. Despite that, I got another long break from the seizures. During this time, I was actually able to go off of my seizure medication for over a year. That was the best year ever! I never realized how much the medications affected my concentration, mood, and confidence until I was able to experience life medication free.
Unfortunately, a build up of scar tissue in my brain caused my seizures to return just as I was getting ready to start my freshman year of college. Throughout my first year at the University of Wisconsin-River Falls, my seizures progressed quickly. In December of 2017, I had a tonic clonic seizure for the first time in over 15 years.  I experienced several more over the following months, some in which I stopped breathing and needed paramedic assistance.  The medication increases and relentless seizures made college life very difficult, but I managed to finish my first year with a 3.3 GPA.
It was determined that another surgery was the best option to try and eliminate the scar tissue and hopefully provide me some relief from the seizures.  This would require me to put college on hold to focus on my health. I had my fourth surgery on December 14, 2018.  Luckily, I was a candidate for a new procedure called stereotactic laser ablation, which allowed my surgeon to  access my brain through a small hole rather than having to undergo a full craniotomy.  A laser was then used to remove the damaged brain tissue.  While this surgery was much easier to recover from, it did not stop my seizures, as hoped.  It did help with the intensity of the seizures, but I still have anywhere from 1 - 5 simple partial seizures a day.   I will most likely need more surgery in the future.
Living with epilepsy for most of my life has not been easy. I’ve missed out on a lot of things that other people my age have gotten to experience, I’ve had to give up my dreams of joining the military, and I’ve even had to give up driving off and on over the years.  On the other hand, epilepsy has made me a stronger person and taught me to never take life for granted.  I have learned that many people don’t truly understand what epilepsy is or the effects it can have on the lives of those who live with this disease.  The Epilepsy Foundation of Minnesota works tirelessly to educate others and raise awareness for epilepsy.  I am walking to support this organization that has been there to help my family and thousands of others, as they learn how to cope with the many challenges that epilepsy brings.