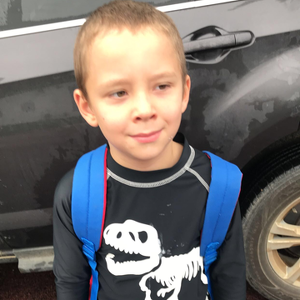 Liam was diagnosed with Mesial Temporal Sclerosis last year.  He has scar tissue on the right side of his brain next to his ear lobe.

When he was 18 months old he suffered a seizure for 20 minutes and was air lifted to Childrens Hospital.  We were told that if he didnt have many seizures after that incident that he would be free from the threat of developing a seziure disorder by the time he turned six.  We thought we were in the clear as time went by but the summer that he was 6 proved to us that he was not.  He seized on a water slide, he seized on vacation, he seized at home, he seized at daycare, he seized on the sidewalk, he seized at school, he seized in restaurants, you name it.  He just dropped and that was it.  He was gone and this blank million mile stare was all thats left.  He went from a normal boy to seizing multiple times a day.  The seizures would take so much out of him that he would sleep for hours after.  We went through 2 neourologists until we found his current doctor at the U of M.  The quick decline of his health last summer from a normal rambunctious boy to a very sadated child took its toll on all of us.  Not haveing awnsers, waiting for more tests, meds that didnt work, but the worst part of it all.... Was watching Liam get upset because he was scared and there was absolutley nothing we could do to console him.  He still has his days where he wants a new body because this one is broken or why cant someone else have this I dont want it.  I looked on facebook groups for help because I was way out of my league.  I found a Parents of Children with Seizures group and joined.  They have been a sounding board for me and other parents of these special children to vent, share milestones, ask questions, and cry if we have to.  I found out that Liam isnt the only child who HATES taking his seizure meds.  =)  I showed him videos of kids who were seizure free and ones still struggling like him.  He sat next to me and the look on his face when he saw them, I will never forget it.  A side smerk rolled off his lips and the look of "Im not the only one" brushed past his face.  I read some of the stories to him and I said "these kids are just like you, your not alone".

Back to the science part.  What makes this rare is that this diagnosis is typical in older patients.  Children due to their developing brains do not already have dead tissue on their brain.  Its been hard to keep his seziures under control and just when we think we have a grip on it he seizes again.  He has been through 2 med interventions and if the 2nd one doesnt hold the likelyhood of a 3rd intervention's effectiveness is less than 5%.  He would then have to be studied as a possible candidate for surgury to remove the scar tissue on his brain.  But even that is not that easy.  There are many things that could rule out surgury.  Where the seizures come from, where in his brain "Liam" actually is, the long term effects, the possibility of another scar forming.  Would he come out the same?  Would he come out different? Would he come out at all?

It has been devistating as a mother watching my baby go through this.  NO PARENT should have to come to terms with their childs mortatlity and have quality of life discussions with their doctors should the worst happen.  That has been our truth for the last 15 months since this nightmare started.

But Liam has shown great strength even when Im weak.  I want the opportunity to take him to this walk and let him see others like him.  To show him that he is not alone.  Please help us do this.  Thank you.  Dorinda