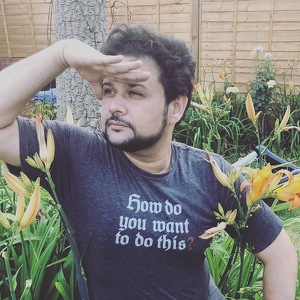 I was raised in the 80s by a collection of muppets and droids. Gradually breaking out into the real world, I found it not to my liking. Since then I use my arcane powers of literary prestidigitation to try and rewrite reality so that it's more to my taste... more dragons, more magic, more starships, kinder and warmer and more loving. Someday I will be a real boy.

I will be attempting to write one short story a week, to keep up with those delightful Clarion West 2021 participants for a total of SIX short stories (2000-5000 words) AND at the same time work on writing a novella (20000-40000 words), which is something I haven't done before and would like to try.

Writing Sample - extract from "Eye of the Pyramid"

It was better than Netflix. Actually, it was on Netflix, they were one of the corporate sponsors. And Disney+ and HBO and on Twitter and Facebook and Zoom and all the others, but we preferred the official feeds to the amateur stuff. Sara and I in our tiny Vancouver apartment had Netflix parties and made popcorn, every Saturday night, inviting over our liberal middle-class thirtysomething friends to watch the weekly roundup show, “The Human Race”, hosted by Jimmy Fallon. We watched every week, until it was all over. I guess we’d developed a taste for it. The blood, the emotional outbursts, the sad little romantic gestures and tearful farewells. And the funny ones, we loved the funny ones, the darker the humour the better.

There’s this one I still tear up laughing about when I remember it, this guy, some poor schlub in a grotty apartment with some menial job comes home one Friday evening and decides to take part. And he’s sitting there, at his breakfast table in the kitchen, with a Bud Light in front of him, and he’s trying to give his, you know, speech to the camera but he’s so loaded that he keeps repeating himself and stumbling over his words and he keeps saying “Martha, Martha, I love you baby, don’t you ever f-forget about me…” while he’s blubbing away, the tears and snot running down his face, trying to focus on the camera… and then, get this, he’s so drunk he fumbles for his cigarettes and he’s still saying “Martha” when he lights one and the whole room curls up and explodes into an orange fireball like whoomph! and there’s just a moment to see the realisation dawning in his eyes - you have to freeze the frame to really catch it, I’ve got a screenshot somewhere - and the feed cuts out… and can you believe it?! The guy actually forgot all about the gas from the oven! The whole reason he was filming in the first place! Man, that one cracked me up. I laughed so hard, Sara got a little mad and told me I lacked the basic decency of an evolved human being and I ended up sleeping on the sofa that night.

Different countries reacted in different ways. In a lot of them, especially in India and Pakistan and most of the Middle East and Northern Africa, there were the expected mass murders and local wars along caste and religious and tribal lines. Mass, mass burials. All the wars worldwide were internal, surprisingly, there was no rogue nation attacking someone else’s territory to make up the numbers, not even the ones you’d expect. Everyone was too focussed on their own neighbours, I guess. Jerusalem burned for a week. It was kinda sad.

Russia was chaos. In China and North Korea (and, I think, Cuba?) they declared their decimates (they call them decimates all over the world, I don’t know why, it’s not one-tenth after all) had been officially selected by the State for the optimum overall good, and anyone disobeying the cull orders was to be shot along with their entire families, and they saved the dissenter for last and made them watch. Most went quietly enough after that.

I don’t know why it was mainly chemical and biological weapons in South America. It just was.

Here in Canada and in Australia and the United Kingdom we had the Lottery and volunteers, lots of volunteers. New Zealand had the Lottery too but weirdly also a huge resurgence in cannibalism, and nobody can explain that one even now. Go figure. Europe was mostly volunteers.

In the New American Confederacy, though, they had to do things their own special way. Good old US. Congress and the Senate together with big pharma and the military-industrial complex and some of the world’s largest corporations decided amongst themselves that it would be best to take their capitalist principles to their inevitable end point. Thus began the Great Human Race. If you agreed to kill yourself, in whatsoever manner you so choose, your loved ones would be made wealthy enough to sustain them at a considerable level of comfort for the rest of their long lives. Guaranteed by the US Government and the corporations who would take the financial hit, as long as Joe Public paid the mortal cost.

Is anyone really surprised that it was so popular? Both in the NAC, where it was taken up enthusiastically by a significant proportion of the population – way more than the quota, as everyone knows – but also in the rest of the world who watched with horror and fascination as the country that had always prided itself in being the world leader in the entertainment industry turned their media skills to the death industry. Well, death and entertainment. Bread and circuses.

Most Americans, it turned out, didn’t really mind killing themselves all that much. Not when it came down to it. Not when they knew that their families would be set up for life and well looked after.

They just wanted it recorded.

They wanted us to watch.

Short stories of genre, I try and write a nice blend of sci fi, fantasy and horror. At the moment I'm focussed on writing as widely as I can and just experimenting with different genres and styles.

I am not asking for donations or financial support, however if you want to support Clarion West and the excellent work they do feel free to go ahead and support them!

I am looking for moral support and cheerleaders, that's more my jam.