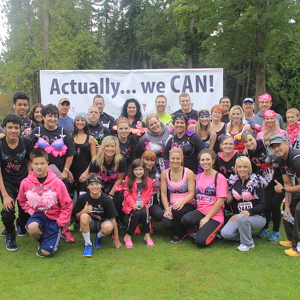 On May 22nd, I will be dashing in pursuit of a cure for breast cancer at the 5k Bra Dash to raise money for Wings of Karen. I want to match the sense of urgency Wings of Karen has to fund a cure, which is why I have joined.

Please help me in raising the funds needed to drive innovative research projects so that we can be free from breast cancer.  100% of your donation will support breast cancer research locally, which will benefit all of us.  Every single penny ... amazing, right?!  Please click here  to see the distinguished researchers and their work we are supporting, that are shaping a brighter future for all.  You are part of the answer!

Can I count on your support?

Wings of Karen is a grassroots 501(c)(3) organization that believes donors should know how their hard-earned dollars are turned into tangible hope.

Working directly with the research community, we are getting the most mileage out of every dollar donated.  This is a race save lives, and we are dedicated to finding cures faster. With an absolute sense of urgency, we grant researchers the flexibility and permission to do the needed preliminary work, quickly and efficiently. The faster we fund and nurture these promising early ideas, the faster we will find the answers that will lead us to a cure.

There is passion behind everything we do at Wings of Karen. This passion is shaped not only by the personal battles with breast cancer by the founder of Wings of Karen, but also by the unyielding desire to reach out to all those affected by breast cancer in a positive, uplifting way, and in the process, funding the research that will find a cure.

It is a race to save lives, and every day brings a new opportunity to make a connection, energize a survivor, empower a new generation, and raise the crucial funds needed.

The 5k Bra Dash® is a celebration of what we CAN do as a community to join the fight against breast cancer.

My 26 year journey with breast cancer

I initially discovered two lumps, non-related, in my left breast in 1987. I followed up with doctor and had yearly mammograms. They told me to “Just Watch It” as we have all had been told, if it was multiple lumps, hurtful and breast cancer was not genetically in my family.

One of the oncologist “called my chest a breast cancer farm” as they all now agreed that the cancer was not genetic but due to being radiated as a child for asthma by an allergist who we later discovered had been asked by the medical community in the early sixties to cease his treatments.

Cancer can also be a gift, a call to live life fully. It calls you out, live now, with zest and engagement as we don’t know what our life trajectory will truly be. So many people call it courage as you hear the announcement and go through the process. I call it, living the life you were given, with the choices you determine. I didn’t think of it as “why me”. What if…you can only live in the moment!

Donate Register for this Event